My journey into Early Learning and Childcare

Jake grew up surrounded by children in a nursery that his parents owned, and once he was old enough he helped out when he could. Jake loved being involved and found working with children really rewarding. The only male member of staff at the time, Keith, soon became a role model for Jake and ultimately was an inspiration for him to take up a career in Early Learning and Childcare.

Jake went on to study Sports Sciences at University, where he had the opportunity to work with children during his placements. Jake also worked with nursery classes during the course, and he realised this was the age group he enjoyed working with the most. It was during that time he decided that a career in Early Learning and Childcare was the path he wanted to pursue.

After leaving university in his second year, Jake worked with a childcare agency and was offered a support worker position with funded training through BNG, which provides training services for the care industry, to acquire his SVQ3. Jake jumped at the opportunity, because it meant he had regular paid work doing something he enjoyed whilst studying for his practitioner qualification.

Speaking of his career in Early Learning and Childcare, Jake said: “The best thing about the job is the children; you get to build relationships, see them develop and grow, and you can make a real difference.

“What surprised me is the knowledge base you need to do the job well. It is a highly skilled job and you have to know about child development from a theoretical perspective and how this relates to practice. You have to develop really good observation skills and be able to record what you see accurately and objectively. You need to know the children really well and be able to understand their needs and how you can support them.

“There is a lot of responsibility in the role, you have a duty of care to keep the children safe as well as motivated and engaged, so it can be demanding at times, but if it is the right job for you then the rewards outweigh the challenges.

“You need to be able to see the world through a child’s eyes and imagine what that’s like. There are opportunities to be creative all the time and it is one of the best things about the job.

“To this day, I remember the influence Keith had on me when I was a kid, so I know positive role models stay with you throughout your life. These early influences help shape you and make you so they are hugely important. Children in their early years are at their most impressionable, they are still learning, growing and developing, and good quality Early Learning and Childcare can lay strong foundations for all the challenges that will come.

“The most rewarding thing about the job is the relationships you make with the children. They will never cease to surprise and amaze you!”

The Scottish Government recently created a new role in ELC to help ensure we close the attainment gap.

"I get immense job satisfaction seeing the children and staff thrive because of initiatives I’ve helped to implement."

"I have always been a creative individual and I’m lucky to get many opportunities to use my creativity at work."

Interested in a career in Early Learning and Childcare?

Find jobs near me Find courses near me 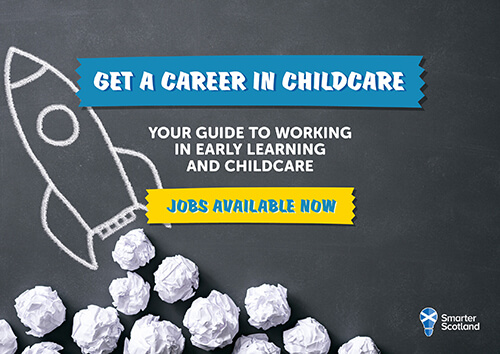 Register for our free guide

Want to know more about how you can start a career in Early Learning and Childcare? Sign up to download our free guide.